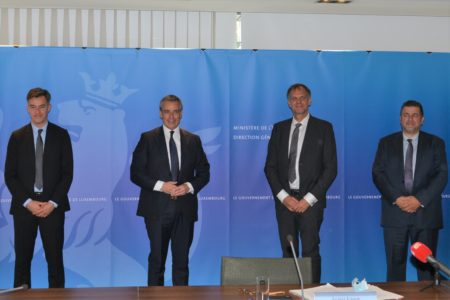 The creation of ESRIC is part of the government initiative SpaceResources.lu launched in 2016 to establish an ecosystem favorable to the development of activities related to the exploration and use of space resources.

This agreement paves the way for cooperation between LSA and LIST to implement the national component of this ESRIC initiative until the European Space Agency (ESA) joins the project in turn as a strategic partner as announced in November 2019.

Unique of its kind, ESRIC’s long term objective is to become an independent innovation centre with an international vocation whose open research structure will allow the integration of other European players, public or private in this field, to constitute a hub of excellence for space resources in Europe.

ESRIC will exist in a first phase in the form of a new department within LIST in Belvaux. Its future activities will be based on four main pillars:

“The project will strengthen Luxembourg’s international positioning in this area by continuing the activities planned under the SpaceResources.lu initiative, adding to them an additional dimension that does not exist elsewhere in Europe,” explained Luxembourg Minister of the Economy Franz Fayot.

“After the launch of the Interdisciplinary Space Master at the University of Luxembourg in February 2019, the creation of the European Space Resources Innovation Centre as part of LIST is the second initiative in Luxembourg of a public research and higher education institution in order to develop and support the space sector on a national and European level and that shows the good collaboration with the Luxembourg Space Agency,” added Minister of Higher Education and Research Claude Meisch.

“The creation of ESRIC will offer great opportunities for synergies and will definitely position Luxembourg as a European reference in the space resources sector,” commented Thomas Kallstenius, CEO of LIST.

For the second consecutive year, the 2021 IMD World Talent Ranking places Luxembourg 3rd in the world for its ability to develop, attract and retain the talent needed for its economy to stay competitive.
Read more

Following an online pitching session on 6 January, the jury of the Circular by Design Challenge has given its verdict. 12 projects will participate in the second edition of this support programme initiated by the Luxembourg Creative Industries Cluster of Luxinnovation with the support of the Ministry of the Economy, which targets creatives with sustainable and circular ideas.
Read more

Luxembourg's diplomatic and consular network is present in over 70 countries across the world. The Ministry of Foreign and European Affairs provides an overview of the network and how it supports the national economy, trade activities on global markets and investment opportunities for international companies.
Read more

The national innovation agency Luxinnovation has published its strategy for the period 2022-2025. This document served as a basis for the elaboration of the performance contract governing Luxinnovation's activities for the next four years, validated by the Government Council on 15 December 2021.
Read more