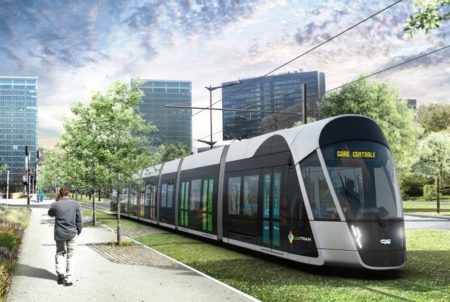 A new edition to Luxembourg’s capital that is generating a lot of excitement is the inauguration of the Lux Tram. Following two sessions of tests this new mode of transportation, designed to improve traffic circulation and commuter flows inside the city enters into public service on 10 December 2017. Each tram train will have a maximum transport capacity of 450 passengers and it is estimated that the trains will be able to carry a combined 10000 travellers by direction and hour.

Many European cities, particularly one such as Luxembourg, which is extraordinarily well preserved and is a historic UNESCO site with fortifications lining the steep valley that dissects the centre of the city, need new public transport solutions to face the challenge of increasing inner city traffic.

According to Delano Magazine, by the time Luxembourg’s tram network is completed in 2021, some 1,975 out of 3,753 buses journeys per day will no longer pass through the capital.

“One of the key strands of the government’s strategy to reduce congestion in Luxembourg City, the idea will be that national (RGTR) buses will no longer have their terminus at the central train station but at changing hubs, served by the tram. The impact of the strategy will be felt as early as late spring 2018, when the tram line extends to Place de l’Etoile and some 866 bus journeys will no longer pass through the capital.”

A few days before the inauguration of the first section of the tram, expansion projects were already being discussed in Luxembourg’s Parliament with the aim of a vote before the government breaks for Christmas.

Click here for full information regarding the Lux Tram

Researching the radar sensors of the future

With support from Luxinnovation, automotive sensing solutions specialist IEE has successfully applied for co-funding from the Ministry of the Economy for a scientifically challenging research project aimed at defining the next generation radar technology. The project is conducted in partnership with the University of Luxembourg.
Read more

More companies supported by Luxinnovation in 2019

This Thursday, Sasha Baillie, CEO of Luxinnovation, presented the report on the 2019 activities of the national agency for the promotion of innovation.
Read more

Fit 4 Resilience: helping companies to relaunch and reinvent themselves

Luxinnovation, with the support of the Ministry of the Economy, is launching "Fit 4 Resilience". This programme helps companies to manage their way out of the crisis, as well as to develop a longer-term development strategy.
Read more

In addition to the various actions and funding plans put in place by the government to combat the effects of the COVID-19 pandemic, Luxinnovation is deploying its resources and skills to meet the needs and expectations of companies affected by the consequences of the crisis in the best way possible.
Read more

Skills: collaborating to be more efficient

The speakers of the 7th L-DIH Talk emphasised that in terms of digital skills, collaborations and partnerships between private and public initiatives are essential to respond to the technological challenges we are currently facing.
Read more