At a press conference on May 2, 2017, the Secretary of State of the Economy, Francine Closener, along with Luxinnovation’s CEO Jean-Paul Schuler, presented Luxinnovation’s 2016 annual report.

Constituted in the form of an EIG (Economic Interest Group) comprised of the Ministry of the Economy, the Chambre des Métiers, the Ministry of Higher Education and Research, the Chamber of Commerce and FEDIL, Luxinnovation has for more than 30 years had the main mission of supporting national economic development by strengthening the competitiveness of companies by stimulating and enhancing their potential for innovation.

In 2016, Luxinnovation teams visited 150 SMEs to assess their potential for innovation. Over the past year, 15 companies have participated in “Fit for Innovation”, a programme that offers support to Luxembourg SMEs, led by Luxinnovation and supported financially by the Ministry of the Economy. The aim of this initiative is to help SME managers to improve the performance of their companies. The programme consists of a diagnostic phase, followed by a project phase. To allow for an improvement in overall performance, the programme focuses on three areas: cost, productivity and timeliness/ quality. Since the launch of the programme in 2014, 44 diagnoses and 25 projects have been completed. Participation in the programme made it possible to improve the overall performance of the companies concerned, which translates into potential gains of a total of 10 million euros per year.

As well as directing companies towards the national R&D aid scheme and their support for European funding programmes, Luxinnovation’s year 2016 was also marked by particular attention paid to start-ups. Thanks to the “Fit4Start” programme, Luxinnovation, in collaboration with the Technoport incubator, supports innovative start-up companies from the start-up phase by offering financing and coaching adapted to the early-stage needs of companies created less than 12 months and composed of at least 2 persons. In 2016, 230 start-ups from 25 different countries took part in the two competitions organised for admission to the programme “Fit4Start”.

Luxinnovation’s 2016 annual report is presented in the form of a dedicated website, available at http://www.luxinnovation-annualreport.lu/

As part of the reform of the economic promotion of the country, the construction of a strong image of Luxembourg as a host country for companies and activities with high added value is now part of the new missions for Luxinnovation, which has also adopted a new visual identity. In addition to communication and marketing, other new Luxinnovation missions include the identification of relevant foreign investors as well as the overview of foreign sectors and activities that can create new opportunities for companies already established in Luxembourg and attract new foreign direct investment. 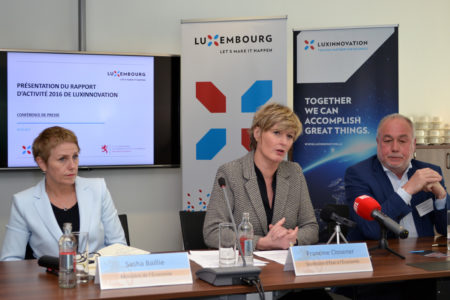 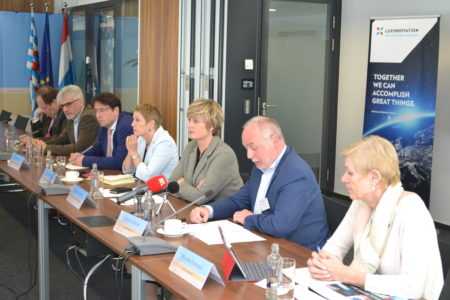 Launched in 2014, the Fit 4 Innovation programme managed by Luxinnovation enables companies, especially SMEs, to find the resources they need to engage in an innovative way and to optimise their organisation.
Read more

For the past 8 years, Marie-Hélène Massard has been the CEO of Luxembourg insurance firm AXA. She values the collaboration between the public and the private sectors that stimulates business development.
Read more

Specialised in various metal construction, la Ferronnerie d'Art Nico Betzen chose to participate in the Fit 4 Innovation programme in order to ensure that its processes are still optimal and, if necessary, to improve them.
Read more

Be part of the technical and technological revolution

Construction company CLK is in the business of building comfortable, healthy and sustainable houses. Active in a sector that is evolving rapidly, CLK chose to participate in the Fit 4 Innovation programme in order to define how to best apply new technical solutions while minimising the risk of change.
Read more

An ideal way to promote innovation

Founded almost a century ago, Minusines is specialised in the distribution of electrical equipment and professional lighting on the Luxembourg market. The Fit 4 Innovation programme has enabled it to improve its operational excellence.
Read more