On 3 March, the Chamber of Commerce, in close cooperation with the Ministry of Foreign and European Affairs, the Ministry of the Economy, and the Embassy of Luxembourg in Bangkok, organised the second edition of ASEAN Day. Here are some highlights. 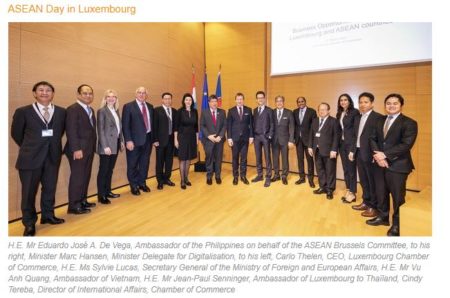 The economic size of the 10 ASEAN member countries, Brunei, Cambodia, Indonesia, Laos, Malaysia, Myanmar, Philippines, Singapore, Thailand and Vietnam, outpaced the BRIC countries of Brazil and Russia, and will compare to the size of India’s economy in the coming years.

The 2020 edition of ASEAN Day brought together stakeholders from ASEAN embassies, governments, finance institutions, and the private sector to provide a unique platform for Luxembourg companies to explore business opportunities in the areas of innovation, digital transformation, connectivity, industry 4.0, and sustainable finance.

Details of the different sessions

The opening plenary from Mr Carlo Thelen, CEO of the Chamber of Commerce, started with the dictum of the 2017 edition that celebrated the 50th anniversary of ASEAN and the 40th anniversary of EU-ASEAN relations, ‘We work better, when we work together!’

During his speech, Mr Thelen pointed out that the Chamber of Commerce, along with the Ministry of the Economy, have organised trade missions in 9 out of 10 ASEAN countries, Brunei being the only exception. He also stressed that Luxembourg was among the first to conduct a trade mission to Myanmar, soon after the country opened up in early 2012.

ASEAN is a giant with huge opportunities for various sectors like biotechnology, renewable energies, automotive, space, and IT, where Luxembourg is successful and where synergies can be explored. Most Luxembourg companies that have entered the Asian markets did so by establishing a presence in ASEAN member countries and even sometimes by choosing to set up regional headquarters there. As an example, Mr Thelen mentioned ArcelorMittal and Cargolux, as well as many other notable Luxembourg based companies successfully operating in ASEAN countries like Ceratizit, Boson Energy, Codipro, Guardian Glass, Rotarex, Solar Cleano and United Caps, to name a few.

Looking at the trade figures and the increasing presence of Luxembourg companies in the region, trade volumes between Luxembourg and ASEAN countries have more than doubled between 2012 and 2018, rising from EUR 2.9 billion to EUR 6.2 billion in goods and services during this period. Carlo Thelen went on to say that there was still room for improvement. In light of this, he announced that the Chamber of Commerce would organise, together with the Luxembourg Embassy in Bangkok headed by H.E. Mr Jean-Paul Senninger, Ambassador of Luxembourg to ASEAN, who was also present in the audience, a trade mission to Singapore and Thailand from 29 November to 4 December 2020.

H.E. Mr Eduardo José A. De Vega, Ambassador of the Philippines on behalf of the ASEAN Brussels Committee, said a few words about the long-standing relations between Europe and ASEAN countries, which, he stated, should be pushed to an even higher level. The latest figures show that ASEAN is the world’s sixth largest market and the EU is ASEAN’s second largest trading partner and the largest provider of foreign direct investment.

Ms Sylvie Lucas, Secretary General of the Ministry of Foreign and European Affairs of Luxembourg, went on to outline the role of Luxembourg as a dynamic connector inside the EU and with Asia. Although Europe and Luxembourg are a long distance from South-East Asia geographically, it has not prevented them from developing strong and sustainable relationships.

Luxembourg has welcomed the conclusion of the free trade agreements (FTAs) with Singapore and Vietnam and is committed to a successful and swift conclusion of the ongoing negotiations between the EU and Indonesia. This first bilateral agreement is expected to be the cornerstone for future comprehensive region-to-region FTAs, which are a priority.

The subject of the presentation by Mr Marc Hansen, Minister Delegate for Digitalisation, was ‘transversal to human, economic and commercial relationships’. Throughout the last century, Luxembourg has always shown initiatives on how to develop its economic framework. With the diversification strategy, the Government decided to invest in infrastructures, which created and supported its state-of-the-art ICT ecosystem. Today, the country counts several data centres from tier 1 to tier 4 certifications and low latency connectivity with other EU countries. Thanks to these developments, Luxembourg has acquired an international reputation as a data hub, underlined by the creation of the first data embassy in the world. Other infrastructure developments such as 5G technology and High-Performance Computing (HPC) are in the pipeline. These upcoming infrastructure developments are indeed essential if Luxembourg wants to enforce the development of big data, AI or IoT services.

Minister Hansen concluded by saying that ‘nowadays, ICT is more than an economic sector: it is a transversal domain essential to the development of almost all activities which cross all areas of people’s lives, employees and companies’.

The morning programme continued with a panel moderated by Ms Shada Islam, Director of Europe and Geopolitics at Friends of Europe, who gave the floor to the 10 ASEAN ambassadors in order to have an overview on business opportunities and innovation in each country, while also sharing updates on ASEAN’s regional economic integration.

Mr Manuel Tonnar, Director for Development Cooperation and Humanitarian Affairs at the Ministry of Foreign and European Affairs presented the ‘Business Partnership Facility’, a financing facility aimed at supporting Luxembourg businesses to engage with partners in selected countries to kick-start innovative and sustainable business projects.

The morning ended with the ‘business clinics’ session involving the 10 ASEAN embassies during which Luxembourg companies had the opportunity to present their future projects and receive important information on the different markets.

The afternoon session of ASEAN Day was dedicated to trade, cooperation and sustainable finance.

Mr Filip Dereadt, Deputy Head of Unit of DG of the European Commission, South and South East Asia, presented the latest news on trade agreements between the EU and ASEAN countries. For the time being, only Singapore and Vietnam have free trade agreements with the EU. The next priority, however, is to soon reach an agreement with Indonesia and Thailand. The aim is to facilitate trade and reduce risks by using different blocks towards the goal of an EU-ASEAN region-to-region agreement.

This was followed by a discussion on green growth and sustainable finance between Mr Robert Jarvis, Adviser on Sustainable Finance at Luxembourg for Finance, Mrs Corinne Molitor, Partner at International Climate Finance Accelerator, and Mr Edvardas Bumsteinas, Head of Asia and Pacific Division, European Investment Bank.

According to Luxembourg for Finance, the interest in sustainable finance started earlier in Luxembourg and this is one of the reasons why the country is today an important financial centre. Until now, only fund markets were well connected between Luxembourg and ASEAN countries, but as Luxembourg is considered a bridge builder, more and more Asian companies see Luxembourg as their EU hub and are moving over.

The final session included a brief overview of academic and research opportunities between Luxembourg and ASEAN, presented by the Ministry of Higher Education and Research. In 2019, 30 students from ASEAN did their Erasmus at the University of Luxembourg, which hosts over 6,400 students, including 54% from abroad. The Ministry of Higher Education and Research from Luxembourg also has close relations with research institutions in nearly every ASEAN country and the University of Luxembourg has agreements with universities in Indonesia, Singapore, Thailand, and Vietnam.

ASEAN Day 2020 wrapped up with a networking cocktail offered by the Luxembourg Chamber of Commerce.

The most recent member of the Luxembourg Trade & Investment Office (LTIO) network in Casablanca officially opened its doors on 6 October 2020. We spoke to Director Atman Haloui and Head of Development Kenza Jouahri about their priorities and the support offered to Luxembourg and Moroccan companies.
Read more

Franz Fayot and Luc Frieden announce the launch of the Digital marketing guide, at the end of the TIB bi-annual meeting (06.10.2020)

ODL – Luxembourg Export Credit Agency, is a public institution that offers a range of services to help Luxembourg exporters in their international activities. Discover it!
Read more

Practical advice to prepare for the end of confinement

In this difficult time, the entire International Affairs team of the Luxembourg Chamber of Commerce is here to help you with your internationalisation projects.
Read more

In order to connect the supply of and demand for personal protective equipment produced and supplied by Luxembourg companies, the national innovation agency, Luxinnovation, has launched the platform www.EPI-COVID19.lu. The website has been co-developed with the wedo.lu team of the Fédération des Artisans.
Read more