In search of innovation “made in Russia”

The advantages of Luxembourg as a host country for Russian innovative companies were highlighted during a visit to the Skolkovo Innovation Center in Moscow on 21 September 2018.

Accueil » In search of innovation “made in Russia” 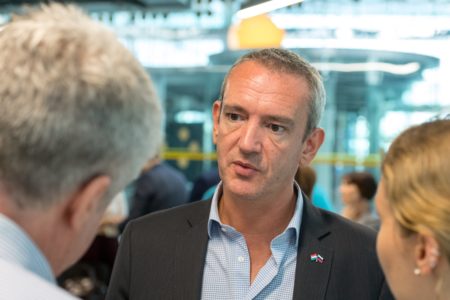 Twenty local companies attended the meeting jointly organised by the Skolkovo Innovation Center and Luxinnovation, located at the heart of “Russian Silicon Valley”. The aim of the meeting, which was organised following the Memorandum of Understanding signed last February between Skolkovo and Luxinnovation, was to present the economic landscape and the opportunities offered by Luxembourg to Russian firms interested in developing beyond the borders of their home country.

Jean-Claude Knebeler, Luxembourg’s Ambassador to Russia, was present together with the Luxembourg delegation composed of Luxinnovation representatives and the Chamber of Commerce to outline the country’s numerous economic advantages.

The size of the country and the ease of doing business were at the heart of the discussions. With its location in the heart of Europe and its small size, Luxembourg is close and very well connected to other EU markets. For Russian companies wishing to invest in Luxembourg, this is an important consideration. Being able to move around easily, invest in other neighbouring countries and easily get in touch with key decision makers is a major advantage not found in many other locations. For Ian Cresswell, Head of International Affairs at Luxinnovation, “the country can undoubtedly be considered as a prime location for all those wishing to access the European market”.

Luxembourg can undoubtedly be considered as a prime location for all companies wishing to access the European market.

Luxembourg also has a unique ability to meet the needs of all companies, regardless of their field of activity or size: it is not necessary for a company to be a multinational giant in order to develop its activity there. “We are a small country hosting mainly small companies,” confirmed Luxembourg’s Ambassador to Russia, Jean-Claude Knebeler.

The country’s economy is constantly evolving with a pioneering outlook. This meeting was therefore an opportunity to highlight the diversity of the national economy and the synergies between Luxembourg and Russia. 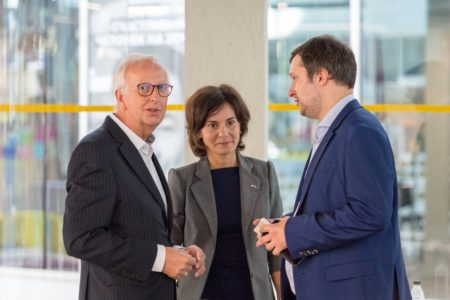 What better example to convince Russian companies than listening to what Russian entrepreneurs have to say about their positive experience of developing their business in Luxembourg?

The CEOs of the start-ups Anisoprint (manufacturer of 3D printers for composite materials) and ExoAtlet (production of medical exoskeletons) outlined the different stages of setting up their companies in Luxembourg and their development plans on the European market. Supported by Luxinnovation, these companies focused on the quality of Luxembourg’s infrastructure, but also on the services offered by various partners to help them set up in Luxembourg.

Fyodor Antonov, CEO of Anisoprint, who recently incorporated a company in Luxembourg to expand internationally was pleased about how easy it was to obtain help, even from high levels.

A strengthened and confirmed collaboration

Many possible fields of cooperation have been identified working closely with Luxinnovation’s Market Intelligence department and with the support of the Luxembourg Embassy in Russia. Following this meeting, several Russian companies expressed their interest in setting up operations in Luxembourg. For David Foy, Head of Sector Development – Digital Economy at Luxinnovation, these companies can bring undeniable added value to the country’s economy. “We met motivated entrepreneurs and high quality companies that have a lot of potential. On our side, we have both the means and the infrastructure to create a favourable environment for the development of their activities and to offer them a springboard to invest in the European market.”

We met motivated entrepreneurs and high quality companies that have a lot of potential.

Russian-Luxembourg cooperation will once again be at the forefront at the “Open Innovations” forum to be held from 14 to 17 October 2018 at the Skolkovo Innovation Centre. On this occasion, a delegation of about forty people will travel to Moscow. This is another great opportunity to identify and build on new synergies.

There are many good reasons to open an office in Luxembourg.

More than fintech: Luxembourg as a European hub for tech startups

Due to the outbreak of the COVID-19 pandemic, the format of the 2020 Cleantech Forum Europe had to be modified. A virtual programme will be offered on the original event dates, 18-20 May, and will be followed by a first-ever end-of-the-year festive Cleantech Forum in Luxembourg on 7-9 December.
Read more

In view of the urgent need to restrict face-to-face meetings as much as possible due to the COVID-19 pandemic, the Luxembourg government is allowing remote medical consultations during the time of the crisis. Reacting quickly, Luxembourg start-up Doctena has added a video conference module to its leading online platform for booking medical appointments.
Read more

Siemens Healthineers has announced the availability of its molecular Fast Track Diagnostics SARS-CoV-2 Assay test kit, which can help diagnose people infected by the virus that causes the COVID-19 disease. The test kit, which allows identification of the virus in less than three hours, has been developed by Siemens Healthineers’ Luxembourg-based daughter company Fast Track Diagnostics.
Read more